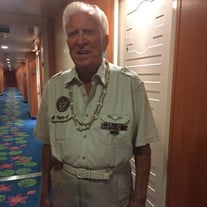 Arthur Bernard Leva Sr. 95, of Kihei, Maui, passed away on January 8, 2021. He was born in Orange, New Jersey to James and Angelina Leva. He was the youngest of 3 brothers. He enjoyed a happy childhood among many Aunts and Uncles and cousins. He was a skilled hunter and fisherman. At the age of 18, with World War II in full swing, he enlisted in the Army Air Corps. He was a ball turret gunner on a B17 and flew 32 missions. He was awarded the Purple Heart, among many other medals of honor. After the war, he married his first wife, Mary. He attended Rider College and earned a business degree. He scaled the corporate ladder by constantly improving his skill set through marketing and sales training. He relocated his young family each time a promotion or a better job was offered. He was an exceptional husband, father and provider and was respected and admired by family, friends and business associates. By the time he retired, he was the President and later owner of several manufacturing companies in Missouri and California. Arthur and his wife, Maria, first lived in Palm Desert, CA. When not traveling, Arthur volunteered at the Palm Springs Air Museum where he finally spoke of his service in World War II. They enjoyed the last 6 years on Maui. Arthur was full of vigor and always had a joke or a story or a song to share. He had an amazing memory and was a voracious reader. He was proud of being a Veteran and was a fierce and true Patriot. Arthur loved his wife Maria with all his courageous heart. He was proceeded in death by his parents, his brothers, Vincent and Robert, his first wife, Mary and his grandsons, Huntington and Jeffrey. He is survived by his four children, Dr. Linda Marie Leva, Barbara (James) Noel, Arthur (Jennifer Jo) Leva Jr., Thomas (Jennifer) Leva; 5 Grandchildren, Sterling, Cameron (Cassini), Reilly, Heather (Sean Anetsberger) and Christopher; 3 Great Grand Children, Reign, Rider and Roguen Heart Leva and many nieces and nephews. His extended surviving family also includes two step Granddaughters, Christina (Mark); Lisa (Rick), 4 step great grandchildren, Noella, Naomi, Dakoda and Cassidy and one step great great grandchild, Gia Marie.

Arthur Bernard Leva Sr. 95, of Kihei, Maui, passed away on January 8, 2021. He was born in Orange, New Jersey to James and Angelina Leva. He was the youngest of 3 brothers. He enjoyed a happy childhood among many Aunts and Uncles and cousins.... View Obituary & Service Information

The family of Arthur B Leva Sr. created this Life Tributes page to make it easy to share your memories.