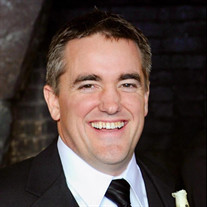 Christopher S. MacLeod Christopher was born in Selma, Oregon (a small town in southern Oregon) on September 23, 1975. He was the fourth out of the five children and second son of Don and Mardie MacLeod. Chris was a happy and content child. He loved everyone and had a bit of a wild streak. The MacLeod family moved to Portland, OR in 1984. Chris graduated from Sunset High School (Beaverton, OR) in 1993 and George Fox University (Newberg, OR) in 1996. He graduated early with a major in accounting and ran cross-country. Chris worked as a CPA in Portland until moving to Oahu in January 2004. He began working for Marriott shortly after and became the Area Director of Finance. Chris made a brief move to California in 2007 with the company and then moved to Maui in 2008. Chris and Catherine met in 2007 and starting dating in early 2008. They moved to Portland, OR where they were married in Timberline Lodge on Mt. Hood, December 3rd, 2011. Their first son Jonathan was born on January 23, 2013. A few months later, they moved back to Maui. Chris and Catherine welcomed their second son Matthew on September 12, 2014 who was born on Oahu. Everyone that knew Chris loved his affectionate smile, contagious laugh, and bright aura. Chris was a devoted husband and loved Catherine so much. Catherine is his happily ever after, his person – and vice versa. He was a very proud and doting father to his four boys. Catherine and his boys are his everything – his world. You could see and feel how much he loved them just by the way he looked at them. Chris was a sports fan and his favorite teams were the Seattle Seahawks, Oregon Ducks, and Portland Trailblazers. He enjoyed spending time with family, traveling, running, mountain & road biking, golf, and football; but, above all else, Chris loved his Lord and Savior Jesus Christ and this is why his love for Catherine and his boys shone to everyone who knew him. Chris is survived by his Wife Catherine, Sons Daven (21), Nikolas (19), Jonathan (9), Matthew (7), Parents Don & Mardie MacLeod (Portland, OR), Siblings - Brent MacLeod (Sandi), Barbara Casuga (Edwin), Gretchen MacLeod (Kristy), Trent MacLeod, and many nieces, nephews, aunts, uncles, and cousins. Chris’ services will be at Grace Bible Church in Kahului on Friday, May 6th and Saturday, May 7th. Friday, May 6th: 4pm-5pm Family Visitation 5pm-8pm Public Visitation – Tribute & Special Memories Saturday, May 7th: 9am -10am Family Visitation 10am -10:30am Public Visitation 10:30am - 11:30am Service – Worship, Eulogy, & Message by Pastor 11:30am - 12:00pm Final Visitation 12pm-1pm Lunch

Christopher S. MacLeod Christopher was born in Selma, Oregon (a small town in southern Oregon) on September 23, 1975. He was the fourth out of the five children and second son of Don and Mardie MacLeod. Chris was a happy and content child.... View Obituary & Service Information

The family of Christopher Steven MacLeod created this Life Tributes page to make it easy to share your memories.

Christopher was born in Selma, Oregon...