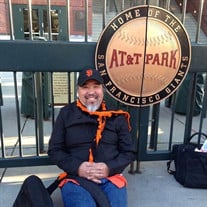 David Toshio Inaba, 53, passed away at home in Lahaina on Friday, May 10, 2019, after battling cancer for the last 8 months. David was born in San Francisco on Oct 6, 1965, attended Westmoor High School in Daly City, and graduated from college at Long Beach State University. He worked for more than 20 years as a media buyer in television advertising, and spent the last 15 years employed in that role by REVShare. David leaves behind his wife, Marlene Parson Inaba (Riverside, CA and Lahaina); his parents Carol & Ed Inaba (Lahaina); a brother Paul Inaba (Daly City, CA); a sister-in-law Michelle Parson Zoodsma (Lahaina); two step-children, Michael Furr and Alyssa Furr (Riverside, CA); three grandchildren and numerous aunts, uncles and cousins. He was predeceased by a step-daughter Ashley Furr. David was passionate about many things – not least his beloved San Francisco Giants! – while his wife Marlene was an equally passionate fan of her beloved Los Angeles Dodgers…the storied rivalry provided years of spirited debate and endless adventures. David loved music, travel, good food, collecting. But mostly he loved people…he was light-hearted, sincere, and funny with the driest sense of humor ever. The man loved to laugh, but even more, he loved to see others laugh. And most of all, he loved people. He had a heart of gold, and his generosity and friendship are beyond compare. It’s nearly impossible to describe the impact he’s had in so many lives. He will be truly and deeply missed not only by family, but by friends and colleagues around the world – a connection with David was a lasting one, and you could count on it without fail, no matter the time or distance from your last meetup. David and Marlene were very involved in animal rescue. What started years ago as “okay, 1 dog – but only a small one, I mean it” turned into a revolving door of rescue dogs, up to 3 at a time. And not one of those dogs was small. There are 3 “medium-size” dog-kids right now , the most recent being a very large Mastiff “lapdog”. David was a big ol’ softie…every one of those dogs took David for walks, and shared his chair and his bed, often all at the same time. Words barely suffice to describe the man – if you know him, you’ll understand the struggle to capture him in just a few paragraphs. Burial will be private on Friday, May 24, 2019 at Maui Memorial Park. In lieu of flowers or koden, donations may be made to Lahaina Hongwanji Mission or to Labrador Rescue San Diego (or the animal rescue of your choice).

David Toshio Inaba, 53, passed away at home in Lahaina on Friday, May 10, 2019, after battling cancer for the last 8 months. David was born in San Francisco on Oct 6, 1965, attended Westmoor High School in Daly City, and graduated from college... View Obituary & Service Information

The family of David Toshio Inaba created this Life Tributes page to make it easy to share your memories.

David Toshio Inaba, 53, passed away at home in Lahaina on Friday,...