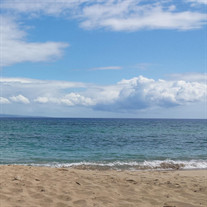 Domingo Johnson Estudillo, 46, of Kahului, passed away peacefully on March 29, 2017 at Maui Memorial Medical Center, surrounded by his loving family. Services honoring Mr. Estudillo will be held at Nakamura Mortuary on Tuesday, April 11, 2017. Visitation will be held from 6:00-9:00pm with prayer service beginning at 7:00pm. On Wednesday, April 12, 2017, services will be held at Christ the King Catholic Church. Visitation will begin at 8:30am with Mass beginning at 9:30am. Mr. Estudillo will be laid to eternal rest at Maui Memorial Park at 10:30am. Nakamura Mortuary is assisting with arrangements. Domingo was born on December 21, 1970 in Abra, Phils. to Ramon & Anastacia Estudillo. He was one of nine children. In 2007, Domingo moved to Maui and began working as a houseman for the Westin Ka’anapali Resort. Five years later, he was able to move his wife and three young sons to Maui. Nine months ago, Doming and his wife, Marites, welcomed their first daughter into the world. Domingo will be remembered as a hard-working, generous and responsible provider. He had strong family values and could always be counted on to help others. He was also a strong, faithful member of the Catholic community. His children will miss his silliness, car karaoke on the way to school, going to the mall and beach and their shared love for basketball. Domingo was predeceased by his parents, Ramon Infiel & Anastacia Estudillo; and sister, Elisa Estudillo. He leaves behind to cherish his memory, his beloved wife of 12 years, Marites Estudillo; sons, Mark Vincent, Mark Jespher, & Justin Lee Estudillo; and daughter, Trixie Estudillo. He is also survived by brothers, Isidro (Nene), Norberto (Myra), Victor (Irma) & David (Sherween) Estudillo; sisters, Badilla Alaba, Celia (Eduardo) Abbago & Matilde (Julius) Seares.

The family of Domingo Johnson Estudillo created this Life Tributes page to make it easy to share your memories.