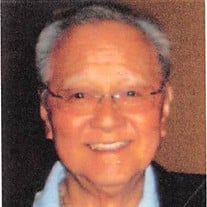 Edwin Ken Yokouchi, 78, of Wailuku, passed away peacefully on May 24, 2017 at Straub Hospital, surrounded by his loving family. Services honoring Mr. Yokouchi will be held at Wailuku Hongwanji Mission on Saturday, July 8, 2017. Visitation will begin at 4:00pm, with services beginning at 5:00pm. Ken was born on January 22, 1939, in Wailuku, to Shigeo & Kikue Yokouchi. He was the second of three children. After graduating from Baldwin High School in 1957, Ken continued his education at Bradley University. In 1974, he married the love of his life, Millie, and together they raised three children. Mr. Yokouchi eventually opened, owned and operated Valley Isle Pest Control for over 30 years. Although he worked hard to provide for his family, Ken also enjoyed taking his children diving, fishing, and attended all of their sporting events. He was also an avid golfer, meeting with his group every Wednesday for the last 25 years. Ken leaves behind to cherish his memory, his beloved wife of 43 years, Millie Yokouchi; sons, Chad (Jolynne) & Brad (Kelly) Yokouchi; daughter, Tracy (Paul) Ng; grandchildren, Chloe, Brady, Chayse, & Kenzie Yokouchi and Riley & Dalen Ng. He is also survived by his sister Winifred (Larry) Shimamura; and brother, Gerald (Joy) Yokouchi.

The family of Edwin Ken Yokouchi created this Life Tributes page to make it easy to share your memories.

Edwin Ken Yokouchi, 78, of Wailuku, passed away peacefully on...