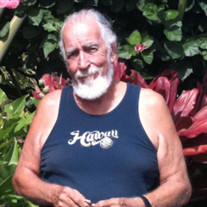 Frank was born in Copenhagen, Denmark, named after the author Frank Norris. He had two sisters, Elsa and Elizabeth. As a small boy, they moved to an expat community in Maracaibo, Venezuela. He liked the tropics and learned Spanish from the other kids. Next they moved to New York (Queens and Manhattan) where he enjoyed the mix of people and played stickball in the streets. When they settled in So Cal, he joined the army. He was stationed in Alaska and received a medal for finding a soldier lost in the wilderness. He married Susan Siemon, had two daughters, Jennifer and Lisa, and worked at 3M as a chemical lab assistant. He found his way into marketing and sales, where he was a natural, and enjoyed traveling his territory of Washington, Oregon, California and Nevada. Later Frank and Susan moved aboard the Stargazer, a 34' sailboat, and set sail for the Caribbean. The harrowing seas around Point Conception, near Big Sur, were more than he had bargained for, and when they reached Oxnard Ca they docked permanently and became live-aboards. He sold boats at Admiralty Yacht Sales. Thirty years ago he arrived in Maui with his second wife Ginger McAfee. He loved the beauty of the island and the generous people. He worked at Noelani (maintenance) and cleaned houses for wealthy residents. With his welcoming spirit and unique humor he made many friends at the Sands of Kahana and Dollies. What he loved most was being aboard a sailboat with good friends. Frank died of kidney failure in his Honokowai home with his daughters Lisa and Jennifer by his side. He is deeply missed by his long-time friends, caring neighbors and family. He is survived by his sister Liz, wife Susan, grandchildren Jasmine and Jacob, great granddaughter Sophia, and nephews Frank, Zach, Gary, Norman and Jason. He is preceded by his parents Edna and Elis, sister Elsa, wife Ginger and nephew Jeff. Services will be on hold because of covid. The date will be announced later on this website. All are welcome to attend and add to his online condolences.

Frank was born in Copenhagen, Denmark, named after the author Frank Norris. He had two sisters, Elsa and Elizabeth. As a small boy, they moved to an expat community in Maracaibo, Venezuela. He liked the tropics and learned Spanish from the other... View Obituary & Service Information

The family of Frank Norris created this Life Tributes page to make it easy to share your memories.

Frank was born in Copenhagen, Denmark, named after the author...