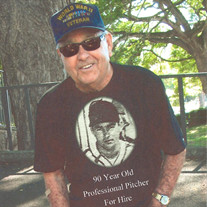 Harry Wallace Castro April 30, 1924 – June 29, 2020 Age 96 Harry W. Castro, a World War II veteran and former Hawaii resident passed away in Bullhead City Arizona. He was the last of his seven siblings. Harry was born to Manuel and Mary Castro and was raised on the island of Oahu in Waipahu where his father was a foreman for Waipahu Plantation. Living on Oahu he earned a scholarship to play baseball at what was called St. Louis College. He played double A baseball for many years as a pitcher and was a member of the Hawaii Baseball League. Harry was working at Pearl Harbor Naval Base as a sheet metal worker when war broke out in Hawaii with the devastation of Pearl Harbor. Harry wanted to serve his county and enlisted at Schofield Barracks and later received Basic Training in Tyler, Texas. At the time his branch of service was known as a U.S. Arm Air Force. His tour of duty took him to Japan, Okinawa, Guam, Kwajalein, Saipan, Philippines, Korea, Midway Atoll, Johnson Atoll, and Enewetak Atoll. When the war ended his unit remained back in Japan and Okinawa to assist in the recovery effort from the war devastation. The unit rebuilt roads, bridges and restored communications, skills he later used upon return to Oahu. Harry was employed by Mutual Telephone, which later became GTE Hawaiian Telephone and today is currently Verizon. Harry lived in Kaneohe, Oahu for fifteen years. During that time, he loved and enjoyed the ocean. His activities were fishing, netting, and crabbing. He was always so grateful for what the ocean provided and shared his catch with family, friends, and neighbors. In 1966 he along with his wife Barbara, transferred their family to Maui to help with the expansion of the telephone service. After 36 years of service with phone company he retired. During his golden years he traveled extensively throughout the U.S. and later settled in Laughlin, Nevada where he lived for the last 25 years. While there he enjoyed the casinos, joined the rock club, hiked the Mohave Desert for rocks and crystals, baked for all his neighbors and was an avid golfer. Harry is preceded in death by his wife Barbara and daughter Kathleen Boteilho. He is survived by his sons Harry Jr. and Ricky and daughter Terri Rezentes. He also has 9 grandchildren and 11 great grandchildren. A special mahalo to the medical staff of Desert Palms and Phoenix Cancer Institute and especially to Dr. Jared A. Malik and Dr. Steven Rosinski. Thank you for your service of excellence and love in this difficult time. Service will be held at Nakamura Mortuary on Friday, February 12, 2021 with public visitation from 10:00 a.m. to 11:00 a.m., Private Service from 11:00 a.m. to 12:00 p.m. followed by V.A. burial service at Makawao Veterans Cemetery at 1:00 p.m.

The family of Harry Wallace Castro created this Life Tributes page to make it easy to share your memories.