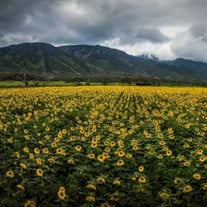 Jean Lani Kwon Herrmann, 85, of Hana, Maui, December 3, 2021. Lani finished 85 turns around the Sun, after travels to 3 continents, in her birthplace of Hana, Maui, Hawaii. Memorial Services will be held privately in Hana, Maui. Lani was born Sept 26, 1936, in Hana, Maui to John Heong Sik Kwon and Alice Onimahulani Akana Kwon. She graduated from The Punahou School in 1953, earned a bachelor’s degree from the University of Chicago in 1957, and a Master of Library and Information Science from the University of California, Berkeley in 1993. She is survived by husband Cal C. Herrmann, half-brothers Michael and Dr. Ron Kwon, half-sisters Linda Quist and Amy Kamikawa, daughter Alyx Herrmann, sons Eric and Conrad Herrmann, and 6 grandchildren. Married in Hawaii in 1961 to Cal, their lives took them to live in Southern California, Virginia, New Jersey, Paris (France), and Northern California, and finally moving back to Hana recently. A talented musician and folklorist, Lani co-founded the Folklore Society of Greater Washington (DC, 1964). Throughout her career she performed at music venues and festivals across the United States and Europe, and even in China. She edited, illustrated, and produced books on folk music, notably Sam Henry's Songs of the People (1990), If I Were A Word Then I’d Be a Song (1980), and Time and the Flying Snow (1977). Her Christmas composition, “The Pickle Tree Carol” (1990) is beloved in the choral singing community. A skilled carpenter, Lani immersed herself in the craft of restoring traditional instruments. She studied medieval instruments and their historical contexts, authoring “The vielle-à-roue, or hurdy-gurdy” (1976). Lani loved food and gardening, and dedicated herself to improving the communities to which she belonged. In California, she supported the Berkeley Food Coop, and after it failed, in 1984, she co-founded the Farmer’s Market in Richmond, California, making fresh local produce affordable and accessible. She volunteered at Rubicon bakery and supported the Richmond Food Bank for many years. After her retirement from performing, Lani and Cal returned to Hana, Maui in 2018.

Jean Lani Kwon Herrmann, 85, of Hana, Maui, December 3, 2021. Lani finished 85 turns around the Sun, after travels to 3 continents, in her birthplace of Hana, Maui, Hawaii. Memorial Services will be held privately in Hana, Maui. Lani was... View Obituary & Service Information

The family of Jean Lani Herrmann created this Life Tributes page to make it easy to share your memories.