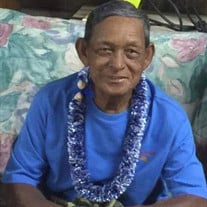 Jovencio S. Sijalbo, 76, of Kahului, Maui passed away on August 15, 2019 at his residence under the care of Hospice Maui. He was born on March 09, 1943 in the Philippines. Visitation will be held on Friday, August 30, 2019 at Christ the King... View Obituary & Service Information

The family of Jovencio Sijalbo created this Life Tributes page to make it easy to share your memories.

Jovencio S. Sijalbo, 76, of Kahului, Maui passed away on August...