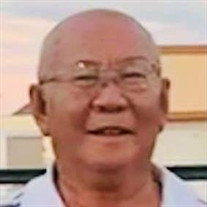 Juanito “Juaning” Dacanay Sr. passed away peacefully on July 23, 2021 at the age of 79 in his daughter’s home at Wailuku, Maui, Hawaii with his beloved wife Emerenciana by his side. Juanito Sr. was born in Poblacion, Sudipen, La Union on June 8, 1942 to father Felino Garlejo Dacanay and mother Dionesia Isidre Moral, both deceased. The third child of 5 siblings, Jose (deceased), Herminia, Fredo, and Helen. Juanito didn’t have the opportunity for much formal education but he worked as an electrician at Meriveles, Philippines until he got married to Emerenciana Macanas Narcise and had 5 children. As couples, they endured hardship and struggles in life until their children grew blessed and refined. Juanito immigrated to Hawaii in 2005 and later became a citizen of the USA with the help of his eldest son, James Dacanay of Honolulu, Hi. He worked as a janitor in one of the hotels in Waikiki until he retired and moved to Maui to help his 4th child, Janet Sibayan, and be with his youngest son, Julius Dacanay. One of his Daughters, 2nd child, Jocelyn Tultog lives in Canada and his Junior, third child, Juanito Dacanay Jr. stayed in the Philippines and served as a Marine officer. As a person, Juanito enjoyed his younger days, he was not perfect, he smoked and drank to divert his longingness when his wife had to work overseas to achieve a better life. He stood as a father and a mother with good qualities too many to mention. He was a very calm, cool, patient, caring, loving husband, father, grandfather, brother, and friend. He has a God-fearing and a God-loving heart. He loves travelling , dining out & watching movies /tv shows. He is an artistic person, a good singer, a good worker, and a great protector. After his birthday last June 8,2021, he was diagnosed with an aggressive form of lung cancer. His brief battle with these critical medical issues showed his courage in facing life, accepting imminent death challenges with a smile. Despite the pain, came out a hero and stayed strong until the end. Juanito will be honored with a humble celebration of life on August 7, 2021, 4 pm at Nakamura Mortuary, 1218 Lower Main St, Wailuku, Hi 96793. Visiting hours are from 5-7 pm. Simple Dinner will be served at 910 Kualoa Place, Wailuku, Hi. Call 310-684-9374 for details and queries.

Juanito &#8220;Juaning&#8221; Dacanay Sr. passed away peacefully on July 23, 2021 at the age of 79 in his daughter&#8217;s home at Wailuku, Maui, Hawaii with his beloved wife Emerenciana by his side. Juanito Sr. was born in Poblacion, Sudipen,... View Obituary & Service Information

The family of Juanito Dacanay Sr. created this Life Tributes page to make it easy to share your memories.