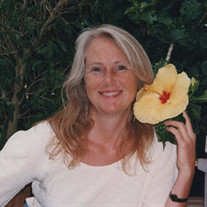 Vera Lindsay Hammonds of Kihei, Maui, Hawaii died on July 4, 2021, due to advanced ovarian cancer. She was 67. Lindsay was born on December 28, 1953. She was preceded in death by her parents, Roy Glenn Hammonds, M.D., and Virginia McBurnett Hammonds, and by her sister, Virginia Hammonds Scott in 1991 and by her brother, Roy Glenn Hammonds, Jr., PhD (Ann) on May 2, 2021. She is survived by her beloved partner of 23 years, Richardo Hanakoo Van Woesik, and by her sisters, Susan Hammonds-White (Walter) and Nancy Hammonds Shuman (Ted). She is also survived by her niece Christy White Berryessa (Steven) and great-nieces Lucy Beth and Cora Lindsay (her namesake), by niece Virginia Scott (Kevin Day) and great-nephew Jasper Day, by nephew Michael Shuman (Meridith) and great-nephew Sammy, by niece Renee Ranjani Byrd (Logan), and by nephew Robert Shuman (Patti) and great-niece Katie and great-nephews Bobby and Andrew. Lindsay attended Peabody Demonstration School in Nashville, TN from Kindergarten through 12th grade, serving as student body president in her senior year. She graduated in 1971 and joined the second class of women admitted to Yale University, graduating in 1975 with a degree in Natural Resources and Environment. Following her graduation from Yale Lindsay began a life that was filled with adventure and boundary-pushing experiences. She joined a rodeo; she spent months in the Amazon jungle of Colombia, S.A. collecting birds; she lived on a self-sufficient farm in New Hampshire; she created a self-sustaining farm with other women in Vermont; she led women-focused wilderness adventures including leading Women-Quest transformational journeys and a DianaEarthMission experience in the mountains of New Mexico. She studied at the National Outdoor Leadership School, received an M.A. in Transformational Therapies, studied massage, and became committed to the process of using sound, touch, dance, and energy in pursuit of healing. She moved to Berkeley, CA and worked on creating a practice based on these pursuits. She made the decision to move to Maui in 1996; in 1998 she met Richardo, fell in love, and lived a joyful life with him in “paradise”. She and Richardo supported many conservation initiatives, including protecting the beaches when turtles were laying eggs or hatching. She became a senior retail associate for Dolphin Galleries and later for Ki-I Galleries, with expertise in art and jewelry sales. Lindsay’s ability to listen and to help her customers clearly identify their wishes made her association with these businesses successful, but her true love remained with her life with Richardo and her joy and love of physical movement, music and dancing. Lindsay is remembered by those who knew her as a light, filled with kindness and joy, who brought laughter and happiness to all those who were fortunate enough to be part of her world. She lived life as fully as she could, following her dreams and inspiring others to do so as well. She left this world too soon, but her memory lives on to lead others to a joy-filled life. A celebration of her life will be held at a later date. Should you wish to honor Lindsay by a donation, please consider charities that support the natural world, including World Wildlife Fund (https://worldwildlife.org), The National Geographic Society (https://www.nationalgeographic.org), or Hawaii Audubon Society, 850 Richards St., #505, Honolulu, Hawaii 96813-4709.

Vera Lindsay Hammonds of Kihei, Maui, Hawaii died on July 4, 2021, due to advanced ovarian cancer. She was 67. Lindsay was born on December 28, 1953. She was preceded in death by her parents, Roy Glenn Hammonds, M.D., and Virginia McBurnett... View Obituary & Service Information

The family of Lindsay Hammonds created this Life Tributes page to make it easy to share your memories.