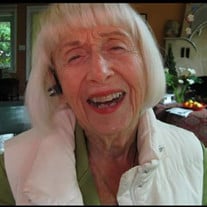 Magdalen B. Creighton passed away February 4, in Kahului, Maui, just a few days shy of her 95th birthday. She was born in San Francisco on February 25, 1926. She. A resident of Kihei, at the time she was residing at Hale Makua with a lingering illness. Maggie Creighton first worked at Pan American Airlines, where she met and married fellow PanAM employee, Elwood Brown. They had four children and lived in San Mateo and then Palo Alto. They subsequently divorced. Ms. Creighton was then employed by the Palo Alto Unified School District, where – with a science teacher from Cubberly High School -- she created and coordinated the Research Observer Program for the Palo Alto Schools, yearly placing more than 100 students in the community alongside professionals in fields of the student's interest. She subsequently received a National Science Foundation grant for a similar summer program for teachers. She was also on the staff of Bridge Mountain Foundation, an early “growth center” developing techniques for enhancing personal creativity and renewal. There she met and married James L. Creighton. The marriage lasted 55 years until her death. Maggie and Jim created a merged family that included Kathleen Benveniste, Bill Brown, Cila Stoddard, Tim Brown and Alan Ashby. During the same period Maggie became certified as an Instructor in Parent Effectiveness Training (PET), a training course teaching communication and problem-solving skills to parents. Mrs. Creighton became a Partner in SYNERGY Consultation Services, and then Vice President of Creighton & Creighton, Inc. She was an instructor nationally in public participation, communication and meeting leadership skills for a number of federal and state agencies. She also served as an instructor for the USDA Graduate School and the U.S. Civil Service Commission. One of her major public involvement projects during this period was the development of a citizen advisory committee to review that electric power rate structure and policy of the Salt River Project, a major public utility in Phoenix, AZ. In the early 1980s, Ms. Creighton became intensely interested in the role of psychological stress in health. She served as a consultant to the Cancer Counseling and Research Center working with Dr. Carl Simonton and Stephanie Matthews Simonton to conduct professional training programs for physicians and psychologists. Ms. Creighton established the Cancer Support & Education Center in Menlo Park in 1983, serving as Director of the Center. The Center offered a structured group training program which attracted cancer patients from throughout the world. While at the Center, Ms. Creighton also established the STEPS Program for HIV/AIDS patients in San Francisco and trained staff of the CORO Group in Sao Paulo, Brazil, to run a comparable cancer program in Brazil. The cancer Center was the recipient of the Golden Acorn Award and the City Council of Menlo Park declared her retirement day as "Maggie Creighton Day" in Menlo Park. She was also honored with citations from the California State Assembly and Senate. The Creighton's moved to Maui for several years, but ultimately the amount of travel become overwhelming for Mr. Creighton who maintained his consulting practice. Upon her return to the mainland Mrs. Creighton rejoined Creighton & Creighton and completed a number of projects including advising the Idaho Department of Health and Welfare on implementation of welfare reform legislation, serving as part of a team conducting dispute resolution training in Russia and the Republic of Georgia, and setting up and managing the operations of a "skunkworks" -- a highly interactive team facility for policy development -- for the U.S. Secretary of Labor. Subsequently Mrs. Creighton obtained real estate licenses in both California and Hawaii, and sold real estate in both places for Coldwell Banker. She also led two tours to Washington DC for youths from East Menlo Park. The Creighton's returned to Maui in 2014. Mrs. Creighton was an active participant in Maui Improv.

Magdalen B. Creighton passed away February 4, in Kahului, Maui, just a few days shy of her 95th birthday. She was born in San Francisco on February 25, 1926. She. A resident of Kihei, at the time she was residing at Hale Makua with a lingering... View Obituary & Service Information

Magdalen B. Creighton passed away February 4, in Kahului, Maui,...