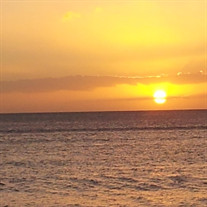 Mark Tadashi Miyashita, 57, better known as “Helms” or “Uncle Helms” passed away peacefully at Maui Memorial Medical Center on April 28, 2017 surrounded by his loving family. A Celebration of Life will begin at 11:00am on Sunday, May 14, 2017 at He Piko No Waiohuli: 881 Lau’ie Dr. Kula, HI. Casual attire please. Nakamura Mortuary is assisting with arrangements. Helms was born on March 22, 1960 in Honolulu to Arthur & Doris Miyashita. He loved playing sports, playing football in high school and baseball with a local league, where he continued coaching in his adulthood. After graduating from Aiea High with the class of 1978, he became part of a life-long group of Braddas that he loved dearly, “The Aiea Boys”. After working at Bright Aviation for a while, he moved on to a career with Hawaiian Airlines. He began in customer service and ended his career in 2003 as chief ramp agent. When he wasn’t working, he enjoyed golfing, and maybe “a little” drinking with his co-workers and friends, fishing off his good friend, Mike’s boat in Waianae and his all-time favorite hobby, Samoan crabbing. In 2009, after 8 years together, he married his love, Milanette Akiona whom he met at Hawaiian Airlines. Shortly thereafter he became a faithful and baptized member of the True Jesus Church. Helms is survived by his loving and caring wife of 8 years, Milanette Akiona-Miyashita; The Aiea Boys, his loving ohana, many adoring nieces and nephews; and a brother, Don Miyashita.

The family of Mark "Bradda Helms" Miyashita created this Life Tributes page to make it easy to share your memories.