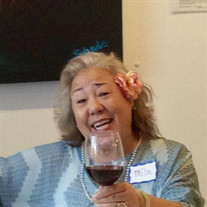 Milanette “Mila” Nalani Akiona Miyashita passed away peacefully August 18, 2019 surrounded by family and friends. Mila was born April 2, 1961 in Honolulu, Hawaii to Llewellyn & Winona Akiona. She moved with her family, Father, Mother and younger sister to the Mainland in 1963. They settled on the West side of Costa Mesa where they bought a home as the family grew by two younger brothers. The family became a part of a big Hawaiian community in Southern California. Mila attended schools in Costa Mesa and spent 3 of her High School years at Estancia High School where she made many friends that loved her and that she loved. Then with her family she moved to the Island of Maui the first part of her senior year in 1978 and graduated from Maui High School in 1979. There too, she made many friends who also loved her and she loved. After high school she then decided to move back to the Mainland to pursue a career in the travel industry. Mila attended Pacific Travel School and graduated to begin a career in travel that would last over 20 years. Mila would meet the love of her life Mark “Helms” Miyashita while working at Hawaiian Airlines. They were friends for many years before they fell in love and were married May 21, 2009 while vacationing in Southern California. Mila loved her Hawaiian culture and respected the Hawaiian ways. She loved Hawaiian music and dancing hula. To her family no one could dance I’kona the way she could. She will be remembered for her laughter, her smile and huge heart. Mila was a woman of great faith as was her beloved mother “Nona” and a devout member of the True Jesus Church in Oahu and Maui. Mila loved her family and friends and would make time to make them feel special. She could tell a good story and entertained many with her wit and her ability to remember the past like it was yesterday. Mila was predeceased by her Husband Mark Miyashita, Parents Llewellen and Winona Akiona and Nephew Isaac Nahinu. She is survived by her Sister Wanette (Darren) Kawahara, Brothers Llewellyn Akiona Jr. and Jerome (Amy) Akiona, Niece Rebecca Nahinu, Nephew Isaiah Kawahara, Nephew Aaron Akiona, Niece Mahea Ohashi, Niece Kaikilani Akiona, Nephew Kalani Akiona, Nephew Thomas Akiona, Nephew William Akiona, Nephew Jonah Akiona, Nephew Benjamin Akiona & Makenna Nagasako. Great Niece and Nephew are Anaya Akiona, Guyson Akiona, Zyler Akiona, Aaron Akiona Jr., Konan Akiona, Jalin Ohashi and Kaden Braden, Kingston Nahinu, and Alyanna Agonoy-Kawahara.

The family of Milanette Nalani Akiona created this Life Tributes page to make it easy to share your memories.