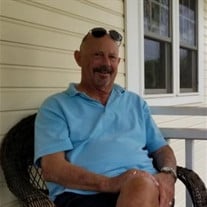 Monte Joe Griffin of Kihei, HI, age 73, passed peacefully at his home on December 9, 2019. Monte was born in Albany, Oregon on March 1, 1946, then graduated from Albany Union High School in 1964. Later attending LBCC, graduating with an Associate Degree in Finance. Husband to Lenna (Hamblin) Griffin for 53 years, son of (late) Robert and Minnie Griffin, brother to Ronald Griffin (Martha Griffin), Uncle to (late) Robert Griffin (Cindy Griffin), Kelly Griffin (Kim Skandalis-Griffin), Perry Griffin (Shelley Griffin), brother in-law to Cary Hamblin, and cousins John, Sherry, and Stacy Thorne. Monte and Lenna were high school sweethearts and were married September 3, 1966. He initially worked at Pacific Power in Ranier, then moving to Springfield wherein he began a banking career in Eugene, Oregon. He loved boating and water sports on the lakes and rivers of Oregon. Also, an avid Collector of vintage cars, coins, and anything rare that caught his eye. In 1986 they moved to Kihei Maui, HI where they lived their dream. In Maui, Monte worked until he retired facilitating construction as a Financial Executive for Honsador Lumber Company. He designed and built their beautiful home in Kihei where he enjoyed caring for the lush landscape, sitting on the front porch relaxing, and the company of friends, neighbors, and his three cats Missy, Tucker, and Gracie. A Heartfelt hug to all our extended family for the love and care you have shared. Special thanks to Michelle and Leah for the wonderful care given which allowed Monte to spend his last days peacefully at home with loving wife Lenna. A Celebration of Life to be held after the first of the year.

The family of Monte Joe Griffin created this Life Tributes page to make it easy to share your memories.