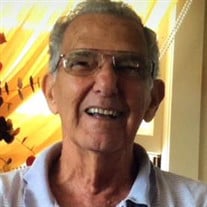 Philibert Louis Vierra, 87, of Wailuku, Maui, passed away peacefully on July 23, 2018 under the compassionate care of Hospice Maui with loving family by his side. Services honoring Phil will be held on Saturday, August 11, 2018 at St. Anthony Church in Wailuku. Visitation will begin at 8:30am. Mass at 11:00am. Reception at Marian Hall at 12pm. Phil will be laid to eternal rest at Maui Memorial Park, with committal service at 2:00pm. Phil was born on December 31, 1930 to Frank and Julia Vierra in Lahaina. Phil was a police officer for the Maui Police Department and retired as the Deputy Chief of Police. He later went on to work as the Public Relations Director for Alexander and Baldwin. Phil loved Maui and dedicated his life to the community and to his family. He was actively involved in St. Anthony church where he was a Lector, Eucharistic Minister and a member of the planning & building committee for today’s modern church. He served in the National Guard, was an avid bicyclist, a fan of University of Hawaii sports and enjoyed traveling. He was a believer in caring for his family’s home by way of continuous home improvement and yard projects where he was known as “Mr. Fix-it.” His home was his castle. Phil is pre-deceased by, his loving wife of 66 years, Blossom Vierra. Phil leaves to cherish his memory, children, Kevin (Carla) Vierra of Aiea, Oahu, Jocelyn (Michael) Cohen of Waikoloa, Big Island, Kyle Vierra of Kihei, Anita Anderson of Kihei, Jeffrey Vierra of Wailuku and Janice (Robert) Souza of Wailuku, 8 grandchildren, 7 great grandchildren and sister Irene Cambra of Kahului. In lieu of flowers and other remembrances, the family would like to honor Phil’s wishes by considering donations to St. Anthony Church in his name.

Philibert Louis Vierra, 87, of Wailuku, Maui, passed away peacefully on July 23, 2018 under the compassionate care of Hospice Maui with loving family by his side. Services honoring Phil will be held on Saturday, August 11, 2018 at St. Anthony... View Obituary & Service Information

The family of Philibert Louis Vierra created this Life Tributes page to make it easy to share your memories.