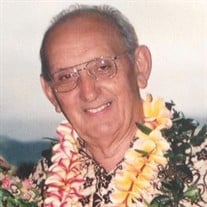 Richard "Dick" LeVaughn Finch, 89, Kihei, Hawaii passed peacefully on January 25, 2019 with his wife of 56 years, Ingrid, at his side, at Maui Memorial Hospital. Dick was born on August 7, 1929 in Washington, Pennsylvania to Lulu Finch Anderson and spent his childhood in Nineveh, PA. He served in the US Air Force as a Staff Sergeant in the Korean War and the Berlin Airlift. Dick retired as a Lieutenant in the Indianapolis Police Department and retired again as a Communications Director in the Forestry Division of the Indiana State Natural Resources Department. Dick loved people and they loved him, and upon his last retirement he shared his warm “aloha” working in public relations for the Target Chip Ganassi IndyCar Racing Team. Dick was a member of Millersville Masonic Lodge #126, Scottish Rite, American Legion, Indianapolis Murat Shrine, Fraternal Order of Police, Indiana University Varsity Club and Alumni Association, Indianapolis Liederkranz, Indianapolis Saenger Chor and the White River Yacht Club. In 1962 he married Ingrid Ella Gantz and they had 2 daughters, Ute Karoline Finch and Elke Jacqueline Wasdovich (Mark). "Opa" will be missed greatly by the two "apples of his eye" grandchildren Nikolai and Alexandra Wasdovich, also his grand dog Lucky and a gaggle of grand cats! His brother, Robert E. Finch survives and he and the multitude of friends Dick made will miss his laughter, kindness and generosity, including his signature gift of handing out two dollar bills! Burial will take place in Rogersville, Pennsylvania at a future date. In honor of Dick and his beloved cat Max, a memorial gift can be made to a Maui non-for-profit cat rescue at https://www.paypal.com/fundraiser/charity/3286189 or mail to the Richard Finch Memorial c/o Kristi’s Cattitude, P.O. Box 11103, Lahaina, Hawaii 96761.

Richard "Dick" LeVaughn Finch, 89, Kihei, Hawaii passed peacefully on January 25, 2019 with his wife of 56 years, Ingrid, at his side, at Maui Memorial Hospital. Dick was born on August 7, 1929 in Washington, Pennsylvania to Lulu Finch Anderson... View Obituary & Service Information

The family of Richard Finch created this Life Tributes page to make it easy to share your memories.