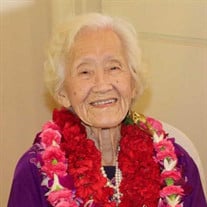 Sadako “Betty” Hamashige, of Kihei, passed away in Wailuku on October 24, 2017, at the age of 102. She was a first-generation Japanese American, born on February 22, 1915, behind her father’s barber shop on Hotel and Beretania Street, Oahu. She was preceded in death by her husband, Hajime Hamashige. She is survived by her son, Herbert (Tazuko) Murata of Hilo, son, Richard Yamamoto of Honolulu, daughter, Janette Kinores of Wailuku, and son, Victor Yamamoto of Wailuku, 11 grandchildren, 19 great grandchildren, and 7 great-great grandchildren. Sadako was the eldest of 3 late brothers. She attended grammar school at Royal School, then Liliokalani High School on Oahu. She worked at a restaurant on Beretania Street and at her father’s barber shop, cutting hair for .50 cents and shaving for .35 cents. Her last job was bartending at Kiwalo Inn where she met the late Captain Hajime Hamashige of the aku boat Orion. She recalls his favorite drink, Primo. On September 2, 1958, at the age of 38, she married Hajime and moved to Kihei, Maui where she retired as a housewife. Sadako loved raising Pikake, she sewed and sold Pikake leis till the year of 2000 to Kahului Florist and Cora’s Flora Shop. She recalls her largest order of 50 strands for Kahului Florist. Everyday she’d get up and sit on her chair with her coffee and a cream cracker with butter. Her favorite things to cook was beef stew, and baked macaroni. In the 70’s - 90’s she watched soap opras from 10:30am to 2:00pm, and at 3:30pm it was time to go outside to water her Piakake and orchids plants. “Fish, (tsukana) makes you live long, eating everyday sashimi or poke.” said grandma. “Everyone needs to eat good, no be picky, eat ham ha.” The family thinks it’s genetics, being her mother lived till age 98. Services provided by Paia Mantokuji will be held at Nakamura’s Mortuary on Wednesday, November 8, 2017 at 6:00pm. Burial will be held at Makawao Veteran’s Cemetery on Tuesday, November 14, 2017 at 9:00am

The family of Sadako "Betty" Hamashige created this Life Tributes page to make it easy to share your memories.

Sadako “Betty” Hamashige, of Kihei, passed away in
Wailuku on...