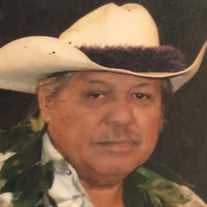 Stanley J. Faustino, of Waihee Valley, Maui, passed away peacefully on October 10, 2018 at his brother Manuel’s home in Paukukalo. A Celebration of Life Service over Urn honoring Mr. Faustino will be held on October 27, 2018 from 9:30am to Sunset at 626C Kaae Road in Wailuku at brother Manuel’s residence. To get to Kaae Road from Kahului/Wailuku, take the first right turn after the Wailuku River Bridge by Sac-n-Sav Grocery Store. Then drive on to the dirt road heading to the Ocean, turn left at the Fork in the road, around the corner from the “Rivermouth”. We’re all going to be at the green and white house along the Beachfront waiting for you. Stanley was the 4th Son, born on August 27, 1938 to Mr. Antone J. and Mrs. Julia Nakoa Kiko Faustino III, of Wailuku, HI. From birth, he was raised by his GodParents, William and Grace Kepilino Kaiue Kekona Sr. of Paukukalo. He lived with the Kekona ‘Ohana for nearly a year and a half before it was safe for him to be returned back to his parents in Waihee Valley. He was the Grandson of Rebecca Peke Nakoa KIko and Great Grandson of Kalawaianui Nakoa and Kailioi Naone of Kahakuloa. Before retirement, Stanley worked many, many, many years in the Construction field as a Heavy Equipment Machine Operator for Service Contractors. When he wasn’t working he enjoyed, diving in the waters fronting their family property in Paukukalo or at Kapuna Beachfront in Waihee. If he wasn’t in the Ocean, he enjoyed being in the Mountains of Waihee Valley. He was a very responsible person who took care of his family. After his Father died, as a Junior Student in St Anthony School, he continued his education and worked all kinds of jobs besides their Taro Patches so he could care for his younger siblings. As he had gotten older, he continued to care for his family when sister Vivian and her Sons returned home to Maui and lived on the family properties with him. Stanley leaves to cherish his memories, Siblings, Evan Rodrigues, Vivian (Rodrigues) Gabin, Manuel (Char Kalanui) Faustino & Arnold Keau. His Hanai Sons, Kanealoha “Kane”; Clayton; Richard “Butch”; Walter “Rocky”; Stanley; Travis and Trevor Rodrigues. His Hanai Great Grand Daughters, Jasmine and Bella Lovato-Rodrigues. His God Children, George Kekona and Arthurlynn Kanuha. Finally, he cherished his favorite sister-in-law Rebecca Kekona. Preceded in death by his Parents, God Parents, Brothers - Antone IV; John J & Finnian J Faustino; Sisters - Rebecca “Honey” Williams; Mildred Lai & Maryann “Maria” Nacino. His God Brothers - William; Anthony; Leonard; Kenneth; Clarence and Peter as well as his His God Sister, Diedre “Didi” Kepilino

Stanley J. Faustino, of Waihee Valley, Maui, passed away peacefully on October 10, 2018 at his brother Manuel&#8217;s home in Paukukalo. A Celebration of Life Service over Urn honoring Mr. Faustino will be held on October 27, 2018 from 9:30am... View Obituary & Service Information

The family of Stanley Joseph Faustino created this Life Tributes page to make it easy to share your memories.