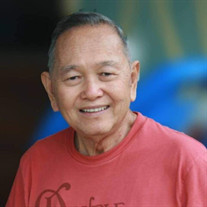 On Friday, September 18, 2020, Stanley Shigeichi Kaneshiro, devoted husband, father, and papa, passed away peacefully at the age of 79. He was born on March 6, 1941 and raised in Pu’unene. He graduated from Baldwin High School in 1960 and retired from Love’s Bakery in 2017, after 40 years of service. On November 19, 1985, he married Bernadette and together they raised three daughters, Sanoe (Jeb) Kaneshiro, Kori Kaneshiro, and Kelli (Cj) Higa. He became a cherished Papa to Khaili, Kaylin, Race, Cam, Avry, Keirah, and Kahiau. Stanley was a kind, genuine, and humble man. He worked hard and provided for his family well. He enjoyed reading current events, watching sports, and dining at his favorite restaurants. His loved ones miss him dearly and will never forget his warm smile, caring gestures, and one-of-a-kind humor. Stanley is predeceased by his sister Gladys; father, Hankichi; mother, Haruko; brother Dennis; and grandsons, Izeiah and Kameron. He is survived by his wife Bernadette; three daughters, seven grandchildren; sisters, Jane Kuwaye and Barbara (Dennis) Kunimura; sister in law, Camille Kaneshiro; numerous nieces, and nephews. The family would like to acknowledge Liberty Dialysis Home Maui, Bayada Home Health Care (Nanette & Dawn), and Island Hospice (Ashley & Liz). Thank you for your genuine compassion. A private funeral service will be held at a later date. Online condolences can be left at www.nakamuramortuary.com.

On Friday, September 18, 2020, Stanley Shigeichi Kaneshiro, devoted husband, father, and papa, passed away peacefully at the age of 79. He was born on March 6, 1941 and raised in Pu&#8217;unene. He graduated from Baldwin High School in 1960... View Obituary & Service Information

The family of Stanley Shigeichi Kaneshiro created this Life Tributes page to make it easy to share your memories.