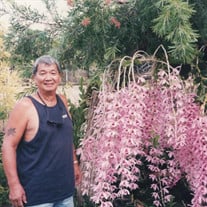 Theodore (Ted) M. Kawamura, “Boss”, passed away on Saturday, June 13, 2020 at his home in Lahaina. Yaeko, his wife of 62 years, was at his side. He was 86 years old. Ted was born in Lahaina in 1934, the second child of Masato and Chiyome Kawamura. He grew up in Kula. After two years at Maui High School, he attended Lahainaluna High School as a boarder and graduated in 1953. Upon graduation, he enlisted in the Marine Corps and served for four years. After the Marines, he married Yaeko and spent two years with the DLNR Forestry. He then took advantage of the GI bill to attend Colorado State University and was able to graduate in a little over three years in 1962. He returned to Maui to teach at Lahainaluna High School. Initially he taught mathematics, general business and agriculture; eventually he taught agriculture full time. “Boss” loved Lahainaluna and teaching. Lahainaluna’s Ag. Department did not have a garden or greenhouse when he arrived, though that would quickly change. “Boss” constantly innovated with his ag. program throughout the years, introducing his students to subjects like hydroponics and aquaculture, rescuing horses and subsequently incorporating them into an equestrian program, as well as holding workshops for his peers where they would exchange ideas and support. His ag. program also sold student-raised produce at the local markets; “Lahainaluna corn” was always popular and quick to sell out. His ag. program became well respected. He was recognized numerous times; some of the highlights were Maui District Teacher of the Year (1975), NVATA Outstanding Teacher of Vocational Education (1984, national), Agri-science Teacher of the Year (1986, national), State Distinguished Service Award (1988) and Outstanding Service to Vocational Education Award (1989). While he was proud of his awards, he took most pleasure from his students’ successes. He always saw the potential in his students and took pride in those occasions when he was able to help his students achieve a better future than they might have imagined for themselves. In retirement, Ted was not idle. He built a greenhouse in his backyard and raised honohono orchids, desert roses, and ohia, amongst other things. He was always willing to share his plants with friends and family and donated many of his plants to local churches for their bazaars. He also shared his time and knowhow with the Lahainaluna Learning Center. Ted and Yaeko traveled all around the world, and especially enjoyed Japan. Ted knew the best places to dive on Maui, day or night. He had a soft spot for animals and his three dog “children”, Rusty, Puccini and Keiko, were his constant companions in later life. He always looked forward to hunting with his friends on Lanai, even when he couldn’t hunt. He was passionate about food and knew exactly what he liked. He was a lifelong fan of Lahainaluna (he served as a JV coach) and UH football. He enjoyed fishing in Alaska with Yaeko. He loved his family and most of all, he loved Yaeko. Ted is survived by his wife, Yaeko (Yamamoto); sister, Paula Ortego; his three children, Mark (Audrey) Kawamura, Robert (Lisa) Kawamura and Lynn (Scott) Frake; his three grandchildren, Jenna Kawamura, Kayla (Eric) Kawamura-Chan, and Dylan Frake. A private memorial service will be held at the Lahaina Hongwanji Mission on Saturday, July 11, 2020.

The family of Theodore (Ted) M. Kawamura created this Life Tributes page to make it easy to share your memories.