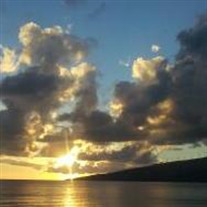 William M. “Bill” Shepard, 84, of Lahaina, Maui and formerly from East Kingston, NH, passed away peacefully on December 3, 2019 with his beloved wife Marilyn by his side. Bill was born in Nashua, NH on March 9, 1935, the son of Basil and Ethel Shepard. Bill was a graduate of Boston University and spent his management career in the aerospace industry. He was active in his church and community. Bill was a dedicated Red Sox, Patriots and Celtics fan. He enjoyed going to water aerobics for exercise but mostly for the camaraderie of friends. He was big fan of the Trilogy and their trips to Lanai, having been on board at least 50 times. He will be remembered for his charm and endless wit. Bill cherished the time spent with friends and family. Bill leaves his loving wife of 40 years, Marilyn C. Shepard; daughters, Martha E. Shepard, Lisabeth A. Shepard, and Jennifer L. (Ben) Shepard Berube; hanai son, Aaron R. (Tiffanie) Thibodeau; granddaughters, Genevieve C. Berube, and Rosalyn M. Berube; and hanai granddaughter, Finlan B. Thibodeau. Bill is survived by his brother Donald and was predeceased by his wife, Margaret Cast Shepard. Services will be held Thursday, December 12, 2019 at Sacred Hearts Mission Catholic Church, Office Rd, Kapalua, HI with visitation from 9:30 – 10:30 and a funeral mass at 11:00. At the family’s request and in lieu of flowers, donations in memory of Bill may be made to Hospice Maui, 400 Mahalani St., Wailuku, HI 96793. Casual or Aloha attire is preferred.

The family of William M. "Bill" Shepard created this Life Tributes page to make it easy to share your memories.