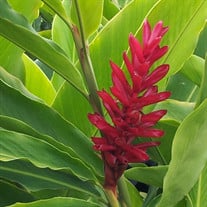 Mr. Yukio Matsui, 90, of Kula, passed away peacefully at Maui Memorial Medical Center on March 17, 2017, surrounded by his loving family. Services honoring Mr. Matsui will be held at Makawao Hongwanji on Saturday, April 22, 2017. Visitation will begin at 1:00pm, with memorial services beginning at 2:00pm. Family requests aloha attire and please, no wreaths. In lieu of koden, please make a contribution to your favorite charity in memory of Mr. Matsui. Yukio was born on October 22, 1926 in Lahaina, to Tokumatsu & Kikuno Matsui. He was the 3rd of 7 children. After attending Kealahou School, Yukio went on to study auto mechanics at Maui Vocation School. In 1950, he married his love, Mitsuko Kawahara, and together they raised four children. As a life-long farmer of both vegetables and flowers, Yukio relished the time and attention cultivation requires, and was proud to share his produce with neighbors, friends and family. Around the house, he was “Jack of all trades, Master of ALL”. He just had a distinctive way of knowing how to fix anything, literally, anything. His family will remember him fondly as a quiet and humble man who taught them the importance of hard work. Mr. Matsui was predeceased by his parents, and his son, Clyde Matsui. He is survived by his beloved wife of 67 years, Mrs. Mitsuko Matsui; son, Leon (Renee) Matsui; daughters, Karen (Calvin) Fujimoto & Susan Matsui (Eugene) Matsubara; and his constant companion & best friend, his dog “Lady”; 7 grandchildren; 4 great-grandchildren. He is also survived by sisters, Betty Ige, Kay Kuwamoto, Barbara Wong & Frances Tanaka; and brother, Yasuo Matsui.

The family of Yukio Matsui created this Life Tributes page to make it easy to share your memories.

Mr. Yukio Matsui, 90, of Kula, passed away peacefully at Maui...