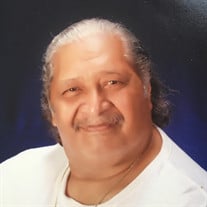 Abraham Kealaluhi Aki Abraham "Papa" Aki, 72 of Wailuku, passed away at home on July 26, 2017 under the care of his family and Hospice Maui. Abraham was a Jack of all trades and a master of many however, his greatest accomplishments in life... View Obituary & Service Information

The family of Abraham Kealaluhi Aki created this Life Tributes page to make it easy to share your memories.