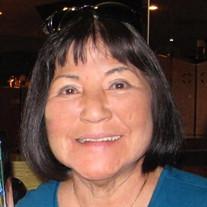 April Shinobu Apana, 82, surrounded by her loving family, was called to her final resting place, at home with God, on Monday, December 31, 2018 at the Maui Memorial Medical Center. Service for April will be held on Tuesday, January 8, 2019 at Nakamura Mortuary. Visitation from 4:30-5:30 pm, Service at 5:30 pm. The family gratefully requests no flowers. April was born to the late Miya and Ushikichi Nakasone on the Big Island of Hawaii. Born to a large family of 14 children April would share how she came from humble beginnings but led a carefree childhood running about barefooted caring for the animals that her family raised. April was blessed with a large and loving family. She is survived by her husband, James Sr., daughters: Aileen (Ken) Hodgson, Lori Migita (Kenneth Tanaka), Tammy Apana, son: James “Kimo” (Lisa) Apana, six grandchildren: Matthew and Michael Hodgson, Allyson Fukuyama, Jennifer, Valerie and Mitchell Migita, sister: Myra Kadooka and numerous nieces, nephews and cousins. April graduated from Hilo High School in 1957and attended the Queen’s Hospital School of Nursing. In 1977 she attended the University of Miami where she received her Nurse Practitioner Certificate. In 1981 April received a Bachelor’s of Science Degree in Nursing. April’s career in nursing began in Kansas and California. Upon returning to Maui she worked at Maui Memorial Medical Center until her retirement. Never one to remain idle April came out of retirement to work at Kaiser Clinic for 15 years. As a nurse she held many positions -Supervisor, ICU Nurse, Head Nurse and Pediatric Nurse. April also mentored many beginning nurses and served as a role model demonstrating the dedication and skills that all nurses should exhibit. One of April’s proudest accomplishments was successfully lobbying to establish a School of Nursing on Maui. They claim that “dynamite comes in small packages” and that was true of April. She loved to fish and could spend hours on a boat, pier or shoreline catching anything and everything that would nibble on her bait. An avid reader she would buy boxes of books from thrift shops and garage sales. But all who knew April knew of her passion for slot machines. The Cal was her favorite “second” home and oh how she loved those “Blazing Sevens”! If there is a big casino in the sky April will be there, free from any pain or suffering. During her career as a nurse and a mentor April is remembered by patients and those in the medical field as a dedicated and caring person. She will be missed not only by her family but by all whose lives she has touched. To all her doctors, nurses, clergy and friends who cared for her during her illness the Apana Ohana would like to express their warmest Mahalo and Aloha! You can shed tears that April is gone or you can smile because she lived. Your heart can be empty because you can’t see her or full of the love you shared. You can close your mind, be empty and turn your back. Or you can do what she would have wanted: Smile, open your heart, love and live on!

April Shinobu Apana, 82, surrounded by her loving family, was called to her final resting place, at home with God, on Monday, December 31, 2018 at the Maui Memorial Medical Center. Service for April will be held on Tuesday, January 8, 2019 at... View Obituary & Service Information

The family of April Shinobu Apana created this Life Tributes page to make it easy to share your memories.

April Shinobu Apana, 82, surrounded by her loving family, was...