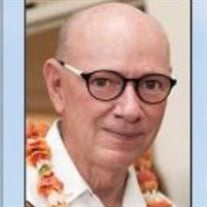 Darrell Orwig, 76, died on May 28, 2021 at his home in Makawao, Hawaii. Darrell was born in Silverton, Oregon, September 1, 1944, to Lloyd Sylvester and Violet Isabel Orwig. He is survived by his wife Mary Helen, son Stephan (Steve), and grandson Graeme; two surviving siblings: Marvin Orwig of Livingston, Idaho; and Sharon Prewitt of Mesa, Arizona. Darrell knew he wanted to be an artist even as a child. His friend Tony Mickela confirms that he received a painting from Darrell when they were both in the third grade. Darrell graduated from Chico State College in California with a B.A. in Art in 1968. In 1971, Darrell was hired by the Army to run a woodcraft shop at Schofield Barracks on Oahu. He and Mary Helen married at Schofield Barracks in August 1971 and remained married for nearly 50 years. In 1976 Darrell was hired to create an arts and craft studio at the Wailea Shopping Village, as it was then known. In 1977 the couple moved up to the Kaluanui Estate in Makawao to be caretakers and artist-in-residence when the Hui No‘eau began to rent the estate from Maui Land and Pineapple. They remained there for nine years, raising their son Stephan, who was born May 7, 1978. During that time, Darrell led Hui No‘eau’s renovation of the old stables into the ceramics studios, set up the Hui’s darkroom, print studio, and painting studio. The Hui generously gave Darrell space downstairs in the main house to create his own artwork as well as letting the family live in the guest cottage. While living at Kaluanui, Darrell created many large photo-realistic oil paintings such as his “Hero Series,” “Hashi Car Wash Series,” “Honolulu Airport Series,” and he filled many sketchbooks with pencil drawings. The family purchased their first home in Makawao in 1985, and Darrell joined the Coast Guard Reserves as a photo-journalist. He applied for and was accepted to Officer Candidate School in 1986. In 1988 Darrell and Mary decided to try their luck with Mainland living and moved to Bainbridge Island, Washington. In 1989 Darrell, now a Reserve Coast Guard Officer, worked for two summers as Protocol Officer at the Exxon Valdez oil spill site. During this time he continued to paint and draw and also worked for a short time as a security guard at the Seattle Art Museum. In 1991 Darrell accepted an active duty assignment at Coast Guard Headquarters in Washington, D.C. He volunteered to be the Coast Guard Combat Artist during the first Persian Gulf War. He traveled to Bahrain, photographed Coast Guard port security duties, and rendered selected photos into large watercolors for the Coast Guard’s collection, which is part of the long tradition of military combat art. Darrell, Mary, and son Steve, homesick for Maui, returned in 1993 when Darrell’s active duty contract was completed. Darrell taught Art 101 at the then Maui Community College, worked for a time with Ka Lima O Maui, and continued to create his art. In 1995 Darrell was hired by the newly organized Maui Arts & Cultural Center to be Director of the Schaefer International Gallery and was there for 15 years before he retired in 2010. In the last 12 years of his life, Darrell had many physical challenges due to Parkinson’s disease and Prostate cancer, however, he continued to paint, sculpt, teach, travel, horseback ride, and gather even more friends into his life. He, through the assistance of friends, traversed the central and Upcountry areas of Maui, and found beautiful places to draw oil pastel works of art out in the open air. He encouraged so many fledgling and accomplished artists with his kindness and worthwhile critiques. A partial list of the words that have described Darrell are: “Talented artist, gifted teacher, incredible friend, generous communitarian, visionary, intelligent, humorous, curious, kind-hearted, intrepid sailor, equestrian, and courageous.” He had an unyielding zest for life no matter what came his way to the very end. You are welcome to make donations in the name of Darrell W. Orwig to the following organizations: Hospice Maui, 400 Mahalani St., Wailuku, HI 96793; Hui No‘eau Visual Arts Center, 2841 Baldwin Ave., Makawao, HI 96768; or Maui Dharma Center, P.O. Box 791029, Paia, HI 96779. Darrell will be buried at the Maui Veterans Cemetery in Makawao.

Darrell Orwig, 76, died on May 28, 2021 at his home in Makawao, Hawaii. Darrell was born in Silverton, Oregon, September 1, 1944, to Lloyd Sylvester and Violet Isabel Orwig. He is survived by his wife Mary Helen, son Stephan (Steve), and grandson... View Obituary & Service Information

The family of Darrell William Orwig created this Life Tributes page to make it easy to share your memories.