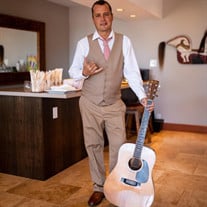 David Lee Wall, of Kihei, HI, passed away December 23, 2021 at the age of 42. He was born in Birmingham, Alabama to Brooks and Mary Wadsworth Wall on August 24, 1979. He graduated Huffman High School in 1997 where he was friends with literally everyone. Dave tried his hand at multiple sports but eventually found his God given talent when he stole his brother’s guitar! He loved to play music and jam out with his buddies for hours. He discovered his interest for cooking while working at various restaurants in Auburn. He continued his culinary passion at the University of Alaska, graduating with a Culinary Arts degree. After graduation in 2007, Dave began his culinary career in Kona, Hawaii at the Outrigger and Kenichi’s. Eventually setting on Maui at the Grand Wailea where he quickly moved up the ranks and was so highly respected as both a chef and person. He found a new group of guys to jam out with on the beach and would talk about these guys constantly when he visited Alabama. Many of his friends and family traveled to Maui where he would drop everything to make sure we all had an amazing experience. That was Dave, he loved people and loved making everyone’s life better. In February of 2018, Dave started dating Ana Nierra. He fell in love with not only her but also her son, Rian. David poured his love into Rian as he does everyone and earned the name “daddy”. He talked about Ana and Rian every time he would call home. He was SO in love. Dave and Ana opened Bluebird Caterers in 2021. Dave’s grandfather, Claude Wadsworth, loved bluebirds and made thousands of bluebird houses over his lifetime. Bluebird Caterers was a tribute to the love Dave had for his grandfather. Dave and Ana married on December 18, 2021. It was such a joyous celebration. Dave is survived by his wife, Ana Wall; stepson, Rian Elizalde; father, Brooks B. Wall; mother, Mary Sparks (Randy);sister, Laura Black-Toler; brother, Brooks W. Wall (Mika) and nephew, Baylor Wall. Proceeding him in death were his grandparents, Warren and Florine Simmons Wall, and Claude and Ruth Ogletree Wadsworth. No words can express how much Dave will be missed. He was an amazing husband, father, son, brother, uncle and friend. He never stopped smiling and always had something positive to say. There is nothing he wouldn’t do for anyone who asked. Wish we had a few more David Lee Wall’s in our lives.

David Lee Wall, of Kihei, HI, passed away December 23, 2021 at the age of 42. He was born in Birmingham, Alabama to Brooks and Mary Wadsworth Wall on August 24, 1979. He graduated Huffman High School in 1997 where he was friends with literally... View Obituary & Service Information

The family of David Lee Wall created this Life Tributes page to make it easy to share your memories.