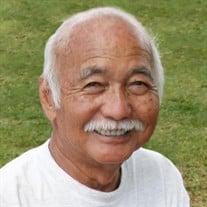 It is with sadness that the family of Ichiro Kikuyama announces his passing on May 6th, 2020. Ichiro was born on August 14th, 1932, in Wailuku, Maui to Taro and Otoyo Kikuyama, the second child of seven children. He graduated from Lahainaluna High School and served in the Army. After his military service, he returned to Maui, met his wife Hideko, got married and started a pig farm. Tired of the mud and flies, he applied and got hired by the State as a meat inspector, a job he held till he retired. In the middle of all this, four sons sprung up within the space of five years. This was in the age of cloth diapers, so you can imagine how rough that must’ve been. Ichiro loved hanging out with people. After retirement, just about every weekend, you would see this little Mr. Miyagi look-a-like on his trusty moped cruising on Front Street towards the banyan tree. There he would sit down on one of the benches, weaving palm fronds into little birds, giving them out to tourists. He also made friends with many of the artists that set up shop under the giant, sprawling tree. Frugal with his money, Ichiro had money in the bank, but by his clothes you would never know it. He always wore boroboro shirts and baggy, worn out pants. But that was just surface stuff. Stuff that wasn’t all that important to him. If you remember Mr. Miyagi from the Karate Kid, he was kind of like him, except the karate part, he didn’t know that. But you could say he had a black belt in palm frond weaving. Ichiro is survived by his wife, Hideko, sons Ben Kikuyama (Sylvia), Dan Kikuyama (Susan), John Kikuyama (Dahna), Dean Kikuyama (Marj), brothers Anthony “Masa” Kikuyama (Florence), Hideo “Harry” Kikuyama (Tsuneko) and Michael Kikuyama, sister Edna Goya, brother-in-law, Yoshiharu “Sammy” Nakamura, four grandkids and two great grandkids and a host of loving nieces, nephews, cousins, and friends. A private service will be held at a later date.

It is with sadness that the family of Ichiro Kikuyama announces his passing on May 6th, 2020. Ichiro was born on August 14th, 1932, in Wailuku, Maui to Taro and Otoyo Kikuyama, the second child of seven children. He graduated from Lahainaluna... View Obituary & Service Information

The family of Ichiro Kikuyama created this Life Tributes page to make it easy to share your memories.

It is with sadness that the family of Ichiro Kikuyama announces...