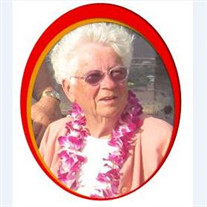 Madalyn Rae Hendren (Main) passed away peacefully in Maui, Hawaii April 23, 2017 at the age of 86. She made a few beautiful places her home in her lifetime. The first was the Main Family Farm in Gibson City, Illinois, Sept 25, 1930. Elmer and Rachel Main were her parents and she is preceded in her death by her parents, her older brothers Bob & Dean, and younger sister Durlene Lawless. Love and work took her to Normal, Illinois when Paul Hendren proposed on their 2nd date, a love that would last for 63 years until his passing March 2014. They both had long careers with State Farm Insurance & their 2 children, Paula & Eric were born in Normal. State Farm opened an office in Greeley, Colorado & Paul and Madalyn packed up with several other Illinois families who became like extended family in the years to come. In 1991 they retired to Fraser, Colorado where mom thoroughly enjoyed the many young kids who stayed in their home, their wonderful neighbors along with the new memories for their family to enjoy. She happily spent her days doting on all the wildlife critters, birds, columbines, hanging her laundry, volunteering, and even fetching Paul a cup of coffee every once in awhile! After Paul's death, Madalyn made one more move to Maui, Hawaii during which time she especially enjoyed getting to be grandma to her youngest grandson, Cameron Hendren. This move also allowed wonderful reunions for her kids, grandkids and great grandsons. Madalyn is survived by her children Paula (Ron) Remple, grandchildren Jordan (Samantha) Remple and great grandsons Tyler & Knox and well as granddaughter Cassia Remple all from Canada. Eric (Julia) Hendren and grandson Cameron of Maui. The family is grateful for the continued sharing of memories and we hope to share Memorials wherever and whenever we gather with those who loved her. There are no formal services planned and Madalyn's ashes will be scattered where her memories lie. Remember her in nature, and if you would like to make a donation please note the "Colorado Bluebird Project" under http://www.denveraudubon.org/about/contact/

Madalyn Rae Hendren (Main) passed away peacefully in Maui, Hawaii April 23, 2017 at the age of 86. She made a few beautiful places her home in her lifetime. The first was the Main Family Farm in Gibson City, Illinois, Sept 25, 1930. Elmer... View Obituary & Service Information

The family of Madalyn Rae Hendren created this Life Tributes page to make it easy to share your memories.