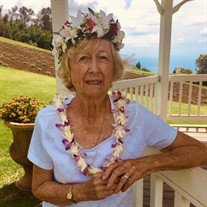 Margaret Mary Marchello passed away peacefully at Kalama Heights Senior Living Facility in Kihei, Maui on Tuesday March 9 at 87. Margaret will be deeply missed by her family and friends. She had an unparalleled positive spirit, and saw the good in others. She was deeply religious and spiritual, a true angel on this Earth. She was incredibly devoted to her family and faith, and loved all people. Margaret was born in Amsterdam, Holland, and raised in China the first six years of her life, until the outbreak of World War II. Her time living in Tinsein, China, with her dear parents were happy ones. She spoke fluent Mandarin, Dutch, and English. Her family was torn apart during the war. She and her mother were interned in an Indonesian concentration camp. The U.S. Consulate helped release them and they later lived in San Diego, California, where her mother worked as a school teacher. Her father remained in the camp for the duration of the war. Her family was reunited through the efforts of the American Red Cross, an organization for which she is grateful, and rebuilt their post-war lives in Europe. Margaret traveled to the United States to attend college at the University of Colorado at Boulder, where she received a Bachelor of Arts, and met the love of her life, Tony. She and Tony settled in the San Fernando Valley, California, where they raised 4 children. Margaret and Tony had a second home in Lahaina, Maui for the past 30 years, as their two sons moved to Maui and raised their families here. Back in California, Margaret enjoyed daily mass at St. Mel’s Catholic Church, tennis, Bible study, bridge, and dinner parties with friends. She was devoted to service. In 1984, Margaret helped found “Angels Way,” in the San Fernando Valley. Angels Way opens its doors to women and their babies who have no other home or support at what is a beautiful time of new life for them. Angels Way is still going strong, 38 years later, and has impacted the lives of thousands. In the garage at Angels Way, Margaret established a “Mom and Baby Store” of free maternity and baby clothes, for those who needed it, and would meet women there at the drop of a hat. In her retirement years, Margaret was blessed to live full-time in Maui. In her eighties, Margaret proudly worked six days a week at her son’s nursery in Launiopoko, documented three things each day she was grateful for in a journal, and attended daily mass and rosary at Maria Lanakila Catholic Church. She loved people of all kinds, striking up conversations, and enjoying coffee after mass with her friends. She loved her family most of all. She delighted in planning and attending parties for her extended ohana. Margaret is grateful to the incredible care workers at Hui Aloha and Hospice Maui for their extraordinary loving care over the last few years, and to her family for their tireless support. She is grateful to her husband of 50 years, Tony, into whose arms her spirit has soared, for the beautiful life he provided for her in Maui, until they were together again. Margaret is survived by her children—Mark (Vicki), Mike, and Marilyn (Greg)—her 12 grandchildren—Crystal (Taylor), Kelli (Evan), Andy (Kristen), Kainoa (Jenny), Annmarie (Lance), Sarah (Tycho), Ihilani, Willa, Nick, Boston, Lauren, and John Marc—and 5 great-grandchildren—Kalewa, Iwalani, Jack, Lilly,and Olivia. She is predeceased by her loving husband Tony, daughter Marybeth, daughter-in-law Judy, and parents Andries and Margaret. To post memories and photos of Margaret, please go to: nakumuramortuary.com. In lieu of flowers, Margaret would be grateful for donations to Angels Way Maternity Home: checks sent to PO Box 70, Woodland Hills, CA 91365-0070, or donate on-line at angelswayhome.org. A Mass of Resurrection for Margaret will be held at Maria Lanakila Catholic Church, Lahaina, Saturday, March 27, with viewing (urn) at 9:15 am and mass at 10:00 a.m. All are welcome in masks, and practicing proper social distancing.

Margaret Mary Marchello passed away peacefully at Kalama Heights Senior Living Facility in Kihei, Maui on Tuesday March 9 at 87. Margaret will be deeply missed by her family and friends. She had an unparalleled positive spirit, and saw the... View Obituary & Service Information

The family of Margaret Mary Marchello created this Life Tributes page to make it easy to share your memories.