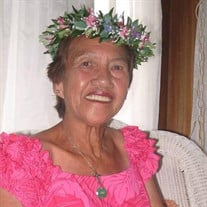 Martha Medeiros, 78, of Lahaina, passed away peacefully at Maui Memorial Medical Center on March 23, 2017, surrounded by her loving ohana. Services honoring Mrs. Medeiros will be held at Holy Innocents’ Episcopal Church in Lahaina on Sat, April 1, 2017. Visitation will begin at 9a, with memorial services beginning at 10am. Aloha attire please. Martha Geraldine Ah Heong Kamalamanui Medeiros was born on January 7, 1939 on Oahu to Ah Wing & Martha Tam Lung. She was the center of the Tam Lung family. Not the youngest, not the oldest, but the strongest. After graduating from Lahainaluna, she married her love, Kayo Medeiros and together they had three children. Although they had three children of their own, the love the Medeiros’s shared was widespread, extending to many generations of hanai children, grandchildren, and on. Martha was always available to render kokua to all ohanas. Martha, affectionately known in Lahaina as “Auntie Papoose” and the “Lady in the Window” was a long-time Kumu Hula of Kapiolani Hula Studio in Lahaina and performed at various Ka’anapali resorts during her career. More recently, she was an active member of the Lahaina Restoration Foundation and assisted as a museum docent for over 30 years. Until the day she passed, Martha was still sharing her talent, knowledge and expertise with students, visitors, family and friends. Her awareness, passion, wisdom and love for the history and culture of our islands has been invaluable in perpetuating the traditions and lore for future generations. In Heaven, she will join her husband, John “Kayo” Medeiros. She leaves behind to cherish her memory, son, John Medeiros Jr.; daughters, Kai Medeiros, Uilani Medeiros-Byer & Pualei Medeiros; and many, many beloved hanai children. She is also survived by brothers, Daniel, Georgie-Boy & Freeman Tam Lung; sister, Daisy Stanton; 14 grandchildren & 23 great-grandchildren. Martha will be remembered as a giving, generous and caring woman who thought of others first and could always be counted on when needed. She embodied the Aloha Spirit and extended it to all. She will be missed, but will always live on in our hearts.

The family of Martha Geraldine Medeiros created this Life Tributes page to make it easy to share your memories.

Martha Medeiros, 78, of Lahaina, passed away peacefully at Maui...