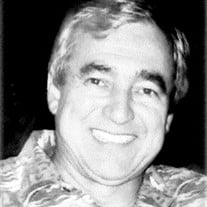 He was Richard Lee Hackendahl, but many knew him as Rick, Ricky, Captain Rick, River Dog, Papa Hawaii, Paul, my brother from another mother, Ricardo, The Rickster, Eye Man, or just RL. He was a life-long learner who was never satisfied with the status qou- investigating everything he came across to learn what made it tick. He retained knowledge like few others, seemingly knowing something about most everything. He was a teacher, finding lessons in everything and passing those lessons on to others. He was a people watcher and an exceptional conversationalist. He had an ease for striking up a long back-and-forth with a stranger, curious to find the thing they had in common or a way they might to able to barter. He loved history and collecting stories to hand down. He was a rebel in his youth. Not only marching to the beat of his own drummer, Rick rocked to the sounds of his own band. Enlisting in the Army at 17 helped temper that rebellious nature with discipline, but that strong will never left and would provide the foundation he built his life upon. He was an entrepreneur, a master plumber, trencher, and backflow-device-tester, establishing multiple successful businesses through hard work and determination. He believed if you wanted something bad enough, you could make it happen. He was an audacious soul, packing adventures upon adventures into his 72 years. He journeyed to the highest heights and the deepest depths of the Earth to find excitement in skydiving and scuba diving. He was, in his later years, a volunteer at Maui Arts and Cultural Center (MACC) and for the Pacific Whale Foundation, where he combined his love for the water and chatting- with the bonus of having a new group of ears for his old jokes. He was a welder, a woodworker, a handyman, a collector, a singer of silly songs, a dog lover, and inventor of sorts, a gatherer and a teacher. Most importantly, he was a loving husband, father, grandfather, brother, uncle, son, and friend. Rick lived a long, event-filled life, yet somehow is still gone to soon. Our hearts and the world are dimmed to lose his courageous soul, but somewhere he's smiling, the sun is shining on his face, a rainbow over his shoulder, enjoying his next big adventure and telling us not to worry because every little thing is gonna be alright. All of this and more - he was. He survived by his spouse Barbara Hackendahl and children Nicole Hackendahl, Teri Aviles, Jennifer Wilson, Steven Szynskie, and Scott Szynskie. Siblings Carol Sautter, Ivan Dahl, and Greg Hackendahl Grandchildren Bryson Hackendahl, Lennon Saldivar, Calvin Saldivar, Marissa Saldivar, Chase Szynskie, Ally Szynskie, Jordyn Szynskie, Adriana Aviles, Madelyn Wilson, Brennan Wilson.

He was Richard Lee Hackendahl, but many knew him as Rick, Ricky, Captain Rick, River Dog, Papa Hawaii, Paul, my brother from another mother, Ricardo, The Rickster, Eye Man, or just RL. He was a life-long learner who was never satisfied with... View Obituary & Service Information

He was Richard Lee Hackendahl, but many knew him as Rick, Ricky,...