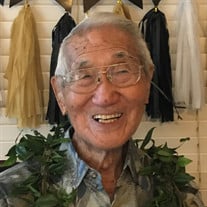 Robert Osamu Ohata, 100, of Makawao peacefully passed away at his daughter’s home on June 13, 2020. He was a humble man born in Wailuku on October 2, 1919 to Seiichi Ohata and Hisa Nishio Ohata. He graduated from Maui High School in 1938 then studied engineering at UH where he graduated in 1942. During his senior year at UH, the war broke out and he went to work for the federal government building roads and surveying in Honolulu. While surveying, he spotted the lovely Alice Hatsuyo Ozaki whom he later married in 1943. They married soon after and fostered a loving marriage for the rest of their lives. Robert started his career with the Territory of Hawaii Highway Department for 3 years under Jack Mayett but wasn’t interested in building highways. He then worked for Libby McNeal (which was purchased by Hawaiian Pineapple Company) for 3 years culminating in work on the Dream City project. He was hired by County of Kauai Department of Public Works to oversee a federally funded flood project at the recommendation of George Hofftailing. Robert was on Kauai when the April 1, 1946 tsunami hit. He stayed to help rebuild and restore the Hanalei area because he so loved Kauai and the people there. Robert returned to Maui in 1958 to become Maui’s first planning director at the request of Mayor Eddie Tam. There he developed many urban projects including several low-income housing projects. He was most proud of the Historic Lahaina Restoration project. After 11 years at Maui County, Robert entered private business and was involved in many projects including Azeka Shopping Center, Pukalani Terrace, Waihee Area Project, Wells Street Professional Center, and various other C Brewer projects. Growing up, Robert was an Eagle Scout and incredibly proud that his son and all his grandsons were Eagle Scouts as well. He was a County Champion springboard diver competing at the State level. While in college he was part of the gymnastics team. Once he settled down, his passion turned to two things, gardening and fishing of all sorts. After moving to Makawao, Robert was finally able to cultivate a garden which included soybeans, corn, avocados and his famous lychee. He started spear fishing as a youth and he passed his love for fishing to his son Carl. He enjoyed many a beautiful day with his favorite fishing partner Alice. At some point, Robert determined that fishing was getting too difficult and transferred his energy and talents to painting. He left behind many beautiful paintings. Robert also was a trustee of Maunaolu College where he became friends with J. Walter Cameron, his wife Elizabeth Baldwin, and J. Walter’s son Collin Cameron. J. Walter would signal dad to sit by him for the meetings. He was the moderator of Iao Congregational Church where he has been a member for many years. Robert is pre-deceased by his wife Alice and his daughter Roberta. He is survived by his son Carl (Sue) and their children Heather (Simo) and Brent (Kanti) and grandchildren Kai, Mia, Anushuka and Praachi; and his daughter Irene (Stuart) and their children Michael and John. Robert is resting in peace with his beloved Alice at the Maui Memorial columbarium. A private family Celebration of Life will be held at a later date. No koden or flowers please, just a moment of reflection. We would like to express our deepest appreciation for the staff at Hospice Maui who made Robert’s last days filled with laughter, stories, compassion, and understanding. They made his passing easier for everyone. Mahalo from our family.

Robert Osamu Ohata, 100, of Makawao peacefully passed away at his daughter&#8217;s home on June 13, 2020. He was a humble man born in Wailuku on October 2, 1919 to Seiichi Ohata and Hisa Nishio Ohata. He graduated from Maui High School in 1938... View Obituary & Service Information

The family of Robert Osamu Ohata created this Life Tributes page to make it easy to share your memories.

Robert Osamu Ohata, 100, of Makawao peacefully passed away at...