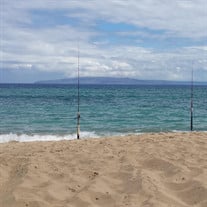 Shawn Vincent Villamor, 57, of Kihei, died October 2, 2018 at Maui Memorial Medical Center in Wailuku. A Celebration of Life and Scattering of Ashes are pending for the summer of 2019 in Oahu’s North Shore. Nakamura Mortuary is assisting with the arrangements. Mr. Villamor was born February 20, 1961 in Kahuku, Oahu. He was the son of Robert E. Villamor Sr. and Bastiana Betty (Tubal) Villamor of Kahuku. He was a cook, specializing in Chinese cuisine. He is survived by his wife of 6 years, Gina (Ventura) Villamor; his son Vincent Villamor, his daughter Kyla Villamor and their mother, Yvonne Bielous; four sisters, Prudence McKinney, Tina Rhodes, Lulu De La Rosa and Gina Roebuck; two step-daughters, Amy Ventura and Trisha Ventura; and a step-granddaughter, Abigail Ribbel. Shawnie-Boy, as he was affectionately known to his family, graduated from Kahuku High School in 1979. In 1980, he enlisted in the Army, attaining the rank of Sargent in the Green Berets. After serving 3 years, he received an honorable discharge and moved to Maui, where he continued for 2 years with the Army National Guard. He was a kind-hearted man who was known for his sense of humor and contagious laugh. He enjoyed fishing on his days off, golfing on special occasions, and never tired of cooking, even on his days off when it meant spending time with family and friends. Saturday, June 29th, 2019 10:30am Turtle Bay Beach, North Shore, Oahu Order of Events: Butch Helemano hosting family & friends beachside 'circle' sendoff Paddle Out for Ashes Scattering Celebration of Life immediately following at Prudence & Jim McKinney's home, 58-343 Mamao Place, Sunset Beach, HI 96731.

Shawn Vincent Villamor, 57, of Kihei, died October 2, 2018 at Maui Memorial Medical Center in Wailuku. A Celebration of Life and Scattering of Ashes are pending for the summer of 2019 in Oahu&#8217;s North Shore. Nakamura Mortuary is assisting... View Obituary & Service Information

The family of Shawn Vincent Villamor created this Life Tributes page to make it easy to share your memories.