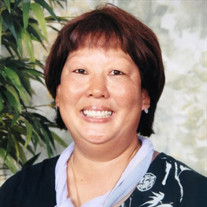 With profound sadness we announce the passing of Valarie Cardone. She passed away peacefully on March 31, 2021 at Maui Memorial Hospital with her husband and two sons by her side. She was 71. Valarie suffered from several serious ailments for many years, but tried not to show it, and not many knew. Valarie was strong and brave, and always tried to be optimistic about the future. She was a thyroid cancer survivor, only to then battle AFib, pulmonary hypertension and, most recently, the unimaginably painful Olgivie Syndrome. Born and raised in Kaneohe, Hawaii, Valarie graduated from California Baptist University, and returned to Oahu where she met her husband of 46 years, Mario. Valarie held various jobs on Oahu, but found her passion as a pre-school teacher when Valarie and Mario moved to Maui in 1985. This included Head Start where Valarie could help children in need. Later in life it was nearly impossible to go out without Valarie being recognized by a now-grown student or parent who would fondly recall how important Valarie had been to them. Valarie later got her real estate license in 2005 to work with and help Mario in his commercial real estate sales and leasing practice. Valarie most enjoyed showing spaces for lease, as she met many people and loved getting to know and help them. Valarie cared about people and was very giving. She was an avid crafter and used her talent to make unique creations as gifts every chance she could get. Her gifts included jewelry that many thought she could sell, but Valarie preferred to give to those she cared for or just to say thank you. As a teacher, Valarie used her crafting talents to their fullest to enrich the lives of those under her care. In addition to crafting, Valarie found relaxation in gardening and had an extensive collection of orchids. She will be deeply missed by her husband, Mario, their two sons, Michael and Terry of Kihei, brothers Gerald Kuniyuki (Lorna) of Kaneohe and Brian Kuniyuki (Kathy) of Kailua, and sister, Ellen Brown (Brent) of Woodway, Texas, and oodles of nephews. All who knew her will never forget her kindness, generosity, love and caring for them. Her caring and giving approach to life made her many lifelong friends. Due to COVID restrictions, a celebration of Valarie’s life will be held at a later date.

With profound sadness we announce the passing of Valarie Cardone. She passed away peacefully on March 31, 2021 at Maui Memorial Hospital with her husband and two sons by her side. She was 71. Valarie suffered from several serious ailments... View Obituary & Service Information

The family of Valarie Matsuno Cardone created this Life Tributes page to make it easy to share your memories.

With profound sadness we announce the passing of Valarie Cardone....